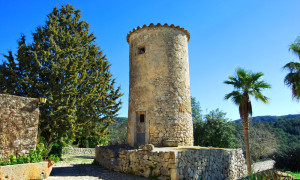 Fincatur south is a 17th century farm located 5 kilometers northeast of Llucmajor, on the slope of Puig de Randa. This elevated location of the valley gives you spectacular views.

Its construction has been progressive throughout its life, adapting each corner to its current needs. A characteristic element is the tower that presides over its façade, a tower that initially was a windmill and that currently has no specific use.

Fincatur South began as a small farm that was self-sufficient of its own small agricultural productions such as oil, wine, cereals and coal.  As for livestock, sheep were raised and the donkeys were in charge of working the land. You can still see some of these elements on the farm such as the grape press.

In the mid-twentieth century its use was declining until the abandonment of all agricultural work.

In 2002 fincatur underwent the biggest and most successful change, the construction of the pool, which gave it a new life in the hot summers. 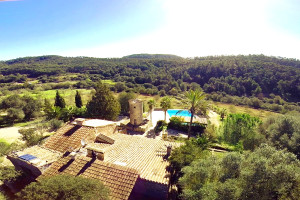 The pool and its surroundings with the large porch as well as its views and that gentle breeze that surround the terrace every noon, is without a doubt the best place for almost everything; have breakfast, rest, swim, eat and dine. That combination of elements together with absolute silence and really spectacular views towards the valley and the mountain mean that time stops and that our perception is the same as 400 years ago when the first stone was laid in the house.

As for the house itself, it is the typical Mallorcan finca built in stone and clay. All the walls are about one meter thick, which gives it a very good natural insulation.

The interiors follow their original distribution and this is how it should be, adapting the spaces and the current needs to the built. For example, one room is located in the old grape press room, others are located in the old stables, the old kitchen still maintains its original fireplace of  three meters wide where the fire was on the ground to cook.

It consists of six double rooms and six complete bathrooms, large common areas, and almost all the rooms have own bathroom a terrace or porch which gives greater privacy if possible to each of the rooms.

The exteriors are typical of the native vegetation and Mediterranean plants, are very large outdoors where you can walk, run or play.

The integration of the farm in the environment and its initial construction is absolute, in addition our commitment to sustainable tourism and sustainable living in general, is total.

Fincatur moves 100% with photovoltaic energy and is not connected to the grid, it is totally self-sufficient, currently generates around 5kw constant, depending on the weather, although it is more than enough every year the installation is expanded and so it is planned keep happening in the future. All surplus generated energy is used to charge accumulators or batteries that ensure the supply of energy at night or when there is no sun. Even so, when the batteries are fully charged and the energy demand is lower than what is being produced, this excess energy is derived to two functions; heat water and move the pumps of the purifier.

As for water, it is extracted from its own well by means of a solar pump that goes to a cistern of about 30 cubic meters. the excess water is treated in special pits and then used to water one of our crops, the paulownia tree.

As for the generation of domestic hot water, it works with an electric heater that heats the water through solar panels. The hot water of the heating is generated by the large chimney in the living room by means of a water tank located inside the chimney and part of the smoke outlet, these heat the water and by means of a pump the water is distributed all the House stays generating around 14kw to the air and 12 kw to the water